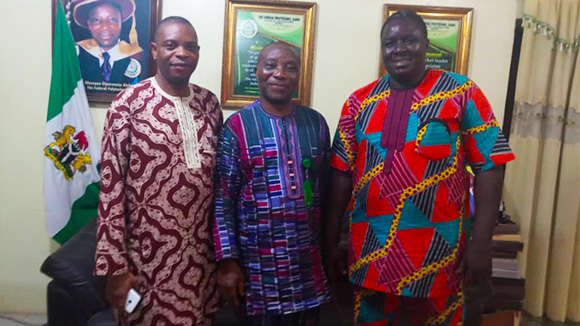 The Alumni decried the action of the  president which is tantamount to soiling the image of the Polytechnic, which according to them, all the members of the Polytechnic community, (that is, the council, management, staff, past and current students of the Polytechnic struggled and sweated to build.
The body however gave a thumbs up to the management and the Students Representative Council for suspending and impeaching the embattled SU president respectively.

Receiving the delegates, the Rector appreciated them for their belief in, and solidarity with their alma mata, stressing that the institution will continue to uphold the virtues for which the institution is known.

With the Rector to receive the Alumni National Exco were the Registrar of the Polytechnic, Mrs. A. F. Osore and the Deputy Registrar, Public Relations, Mr Sola Abiala.